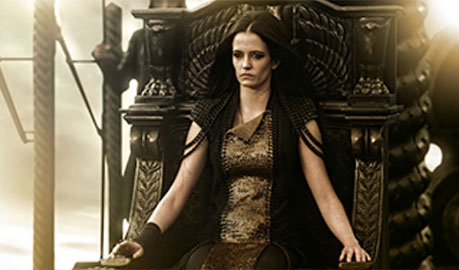 I had fretted a little about not rewatching the original 300 before seeing this, but the filmmakers have helpfully added in scenes from the first movie to remind everyone. They apparently only had about 40 minutes worth of plot, so they needed to pad things out with flashbacks, a couple of pointless side scenes that don’t get anybody anywhere, and, of course, bullet time. Lots of bullet time. Aware that I was one of the few not to be impressed with the first movie, I did take the precaution of bringing along someone who actually did like the first movie. Alas, he didn’t much like this version, either, but at least now there are two of us disagreeing with the pack.

There’s more annoying narration this time through, too. Sigh. This time Queen Gorgo of the Terrible Name (Lena Headey, The Purge) gets to do it, using the excuse of inspiring her troops by explaining things that they already know. No, that wouldn’t inspire me, either. So there’s this long flashback to ten years ago, when the whole mess with Persia started — “with a grievance,” as the queen says, trying hard to make the word ‘grievance’ sound dramatic instead of just faintly silly. Anyway, apparently the first time the Persians wanted to invade Greece, their king, Darius (Igal Naor, The Green Zone), got himself killed by an extremely lucky arrow shot, fired by the Athenian Themistocles (Sullivan Stapleton), known forever after as the Hero of Marathon.

But crazy son Xerxes (Rodrigo Santoro, The Last Stand) is there to see his father die, and that’s where the trouble starts. Somebody wraps him up in bandages and sends him out into the desert where he is reborn as The Mummy. I mean, the God-King. I wasn’t very impressed with him the first time around, and he’s even less exciting here. The real villain of the piece is Artemisia (Eva Green, Dark Shadows), leader of Xerxes’ navy and the power behind the throne.

She’s the most interesting character since she actually gets a background, but there’s no way that the Persian military would let themselves be led by a woman, particularly not a Greek woman. Of course, she’s apparently got super-powers, since she can beat up guys three times her size, so maybe that helps. She’s very Goth. All her fishnet stockings and latex skirts come from Hot Topic. Maybe that helps, too.

There are some other soldier-types but I had a hard time keeping them straight. I remember there was a father and son team, though, who I later figured out were called Scyllias and Calisto (Callan Mulvey and Jack O’Connell, respectively). But it doesn’t really matter who anyone is; the movie’s all about the fighting, and for that all you need to know is that the good guys are still foolishly not wearing any armor… or really any clothes, come to that. It made me feel chilly.

So, to sum up: slow motion decapitations, gallons of watery-looking fake blood, sea battles that never seem to end, the same historical errors (hint: you wouldn’t recognize what was called democracy in ancient Greece), characters making mistakes solely to pad out the running time, and really annoying narration… again. The movie not only learned nothing from its own mistakes, it apparently decided to steal a few of the mistakes Avatar made by worrying more about looking visually cool than actually, you know, making sense. However, I’d rather not risk being lynched by rating it lower than the first one, which means this one also gets two out of five. It was basically the same movie all over again anyway, so I might as well rate it the same.