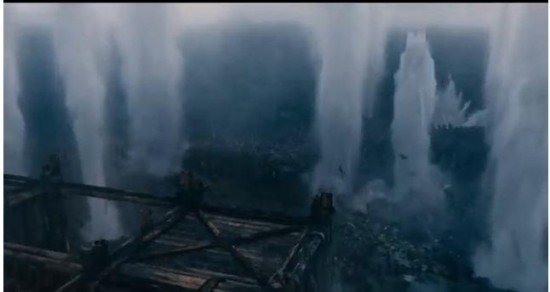 Someone asked me yesterday if I’d liked the movie, and I had to say I wasn’t sure yet. I’m still not quite sure, actually, though that may be partly because, though I wasn’t sure what to expect, I certainly didn’t expect rock monsters. I’m no biblical scholar, but I’m pretty sure those aren’t even in the Apocrypha. All right, technically they’re fallen angels, but they look like rock monsters and they can get pretty mean.

Someone asked me yesterday if I’d liked the movie, and I had to say I wasn’t sure yet. I’m still not quite sure, actually, though that may be partly because, though I wasn’t sure what to expect, I certainly didn’t expect rock monsters. I’m no biblical scholar, but I’m pretty sure those aren’t even in the Apocrypha. All right, technically they’re fallen angels, but they look like rock monsters and they can get pretty mean.

This is another case where I feel a little silly recapping the plot, so let’s try just talking about the parts that are different and see how that goes. Noah (Russell Crowe, The Man of Steel) gets a message from heaven, all right, but it isn’t quite so clear in the film — none of that exact measurements of the ark and what kind of wood to use like in the Bible. At first he thinks there just isn’t anything he can do, except sit with his wife and kids and wait for the rain to start. So he goes searching for his grandfather, Methuselah (Anthony Hopkins of the Thor franchise), to get some advice.

Methuselah apparently likes his little joke, because he secretly puts something in Noah’s tea that makes him pass out and have a vision that explains a little more. I had been wondering where they’d get any wood for the ark, since in the movie the earth is pretty much all barren wasteland, but Grandpa helps with that, too, in the form of a seed from the Garden of Eden, and let me tell you, that is one frighteningly efficient seed.

Anyway, while the descendants of Adam’s son Seth have dwindled down to just Noah, his wife Naameh (Jennifer Connelly, 9), and their three sons, the descendants of Adam’s son Cain are everywhere, and they’re not environmentally conscious at all. They seem to do a lot of strip mining looking for these glowing rocks that make fire when you hit them and also work as flares / exploding bullets. I haven’t really researched those, but I think it’s safe to say those were all the filmmakers’ idea. In the ruin of one of these mines, Noah and company find a wounded girl named Ila and nurse her back to health. She’s played by Emma Watson of the Harry Potter franchise, as if there’s anyone reading this who doesn’t already know that. She was also in The Perks of Being a Wallflower with Logan Lerman (The Three Musketeers), though, who plays middle son Ham here.

Instead of all the sons having wives, though, here it’s just Ila, who can’t even have children because of the wound that nearly killed her. Ham is all for Noah picking out a couple of wives for him and youngest brother Japheth — though he’s a little young for a wife, being about ten — but Noah is starting to wonder if maybe the real plan is for him and his family to live just long enough to save the animals and then that will be it for humanity entirely.

Then there was the whole thing with Tubal Cain (Ray Winstone, Snow White and the Huntsman), who is mentioned in the Bible but appears to be some sort of blacksmith / alchemist / artificer there, and here is just a king, though they do show him forging weapons. He doesn’t seem to have been anything to do with Noah originally, but in the movie he wants the ark all for himself and whichever of his people he deigns to rescue. I guess they did need a human adversary.

Anyway, I’m still not really sure if I liked it, or what to rate it. Three and a half out of five, maybe? Possibly I’m being too fussy, but it bothered me a little that everyone seemed able to work magic — Methuselah puts people to sleep by touching their foreheads, and Naameh uses a few herbs to make the most effective sleeping potion ever. Possibly those were meant to be miracles, but then it makes no sense that everyone would be lamenting the fact that the Creator no longer cares about the earth, because you’d think there wouldn’t be any more miracles then. But on the other hand, I wasn’t bored overall, despite a couple of scenes dragging on too long. I’m also not sure if I wish they would’ve gotten into the whole question of how you could repopulate a planet starting with just one family, but the fact is, they stayed far away from it, and that’s probably just as well.