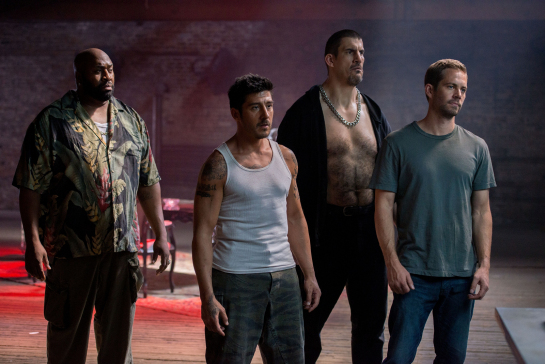 I once said — while reviewing Takers, in fact, another Paul Walker movie — that parkour wasn’t necessarily the most effective way to escape from people chasing you. Looks like I have to take that back now, or at least add that it can work if you happen to be really, really good at it.

I once said — while reviewing Takers, in fact, another Paul Walker movie — that parkour wasn’t necessarily the most effective way to escape from people chasing you. Looks like I have to take that back now, or at least add that it can work if you happen to be really, really good at it. But the guy doing it in this movie (David Belle, Babylon A.D.) is one of the people who invented it, so yeah, really, really good at it. It seems like one of those things that wouldn’t have a specific, known inventor, doesn’t it? But it does, at least according to Wikipedia.

Anyway, the aforementioned parkour inventor plays Lino, who lives in the Brick Mansions of the title, a section of Detroit that’s so awful that by 2018, someone’s put a 40-foot wall all around it so that no one who’s lucky enough not to live there has to look at it. Lino is very good at running away because his hobby is stealing drugs from the dealers so that he can destroy them. It’s a nice thought, but wow. I’m not clear how long he’s been doing that, but now the biggest dealer, Tremaine (RZA, The Man with the Iron Fists) has had enough and wants to get rid of Lino once and for all. But catching him clearly requires something drastic, in this case a hostage, Lino’s ex-girlfriend Lola (Catalina Denis).

So Rayzah (Ayisha Issa, who played a floor lamp in Immortals, and yes, she likes sharp things) and K2 (Goûchy Boy), possibly named after the mountain as he is a rather large man, are sent to go pick her up. There’s also a character named Yeti (Robert Maillet, Pacific Rim) who is even larger, so there’s kind of a Himalayan theme going. But then they throw in a bomb and an old Russian missile and it becomes your basic hostage crisis movie, except there’s some important government type trying to get everyone to call the bomb a ‘device’ instead, because ‘bomb’ has such negative connotations. I think it’s supposed to, though. Anyway, the mayor asks decorated cop Damien (Paul Walker) to get the ‘device’ back, since Tremaine has stolen it.

This is a remake of a movie called District B13, also written by Luc Besson and Bibi Naceri, set in the mean streets of Paris. That sounds wrong, doesn’t it? But I’m sure Paris does have mean streets. The only repeat actor, though, is David Belle, since that is a bit of a niche role. And for some reason they changed the character’s name from Leito to Lino. But a good portion of the cast here also speaks French, albeit the Canadian kind.

They also try to mess with your head a little about who’s a good guy and who isn’t, but that doesn’t really work out, sadly. I’ve sat through worse movies, don’t get me wrong, but this one wasn’t exactly stellar. And it was a little weird, watching Paul Walker up on screen — this was the last movie he actually finished before he died. I was never bored, exactly, but the plot twists aren’t very twisty. There’s some good dialogue and the acting’s all pretty good, but I think I would’ve gotten about the same entertainment value from a good documentary on parkour.