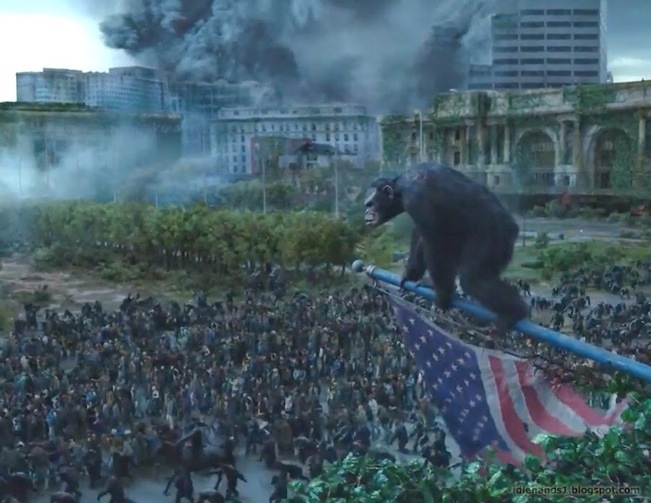 It’s a logical assumption, but while the death toll is even worse than that of the Great Influenza of 1916 (and worse than Contagion), there are still survivors, because humans are like roaches sometimes. One day, while Caesar’s son, Blue Eyes, is out in the woods with his friend Ash, they have an unfortunate run-in with Carver (Kirk Acevedo, Fringe), one such survivor, who panics. He isn’t a terribly nice person, but you can’t entirely blame him for being jumpy.

This is a good warm-up for the rest of the movie, which is filled with terrible misunderstandings and really unlucky coincidences. Sometimes you can just see them coming and keep hoping that maybe this time they’ll somehow avoid it and things will get better, but that never quite happens. But Malcolm (Jason Clarke, The Great Gatsby) keeps right on trying his best, even though he can never seem to catch a break. Malcolm, along with Dreyfus (Gary Oldman of the latest Batman movies, though he was also in Lawless with Jason Clarke and they’ll also both be in a movie called Child 44 later this year), is one of the founders of a human settlement in the ruins of San Francisco. They’re running out of fuel and are afraid of ending up regressing back to barbarity without electricity — understandable, though some of them seem to have regressed back to barbarity already — and they went into the woods initially to see about getting power from a dam there.

The apes aren’t happy about that idea, of course, especially Koba (Toby Kebbell, Wrath of the Titans), who you may remember as the scarred chimpanzee from the first flick. But Caesar’s in charge, and he says to let the humans just do their work and go, or they’ll only keep hanging around the woods looking longingly at the dam and the apes will never be able to get rid of them. It’s a decent plan, but even at that point you have a horrible feeling that it won’t actually work out nearly as expected.

But while it’s definitely a post-apocalyptic movie, what really makes it good is the way it deals with the human side of things, even when the humans are apes. Malcolm has his son, Alexander (Kodi Smit-McPhee, Let Me In) to look after, for instance, and Malcolm’s girlfriend Ellie (Keri Russell) is still dealing with the loss of her daughter to the plague. And Caesar’s mate, Cornelia (Judy Greer, Carrie), has just had a second son, who is absolutely adorable even as he ends up accidentally causing yet another really awful thing to happen.

The way they work in references to the first movie is great, too, never seeming forced, which I was sort of afraid might happen. And just like the first time, you’ll never once feel like you’re looking at special effects — the apes all look amazingly real, especially Blue Eyes, who’s in that awkward teenage rebellion sort of phase. Turns out chimps have exactly the same family problems as anyone. Caesar does always seems to have a scowl on his face, but I guess that’s just his thing. He does have to act all kinds of tough in order to keep his followers in line, since as he says, “Apes always look for the strongest branch.”

I’ll go with four and a half out of five. I was nervous about the lack of James Franco and the prominence of Jason Clarke — nothing against him, but he isn’t exactly a favorite of mine, either. But he does fine with the role. He’s struck speechless an awful lot, but that’s more the script’s fault. I still don’t know what possessed anyone to cast him as the next John Connor, though, because that doesn’t seem like it would work. Anyway, the point is, for once the movie actually lives up to the hype. And unsurprisingly, you can start looking out for number three in the series sometime in 2016.