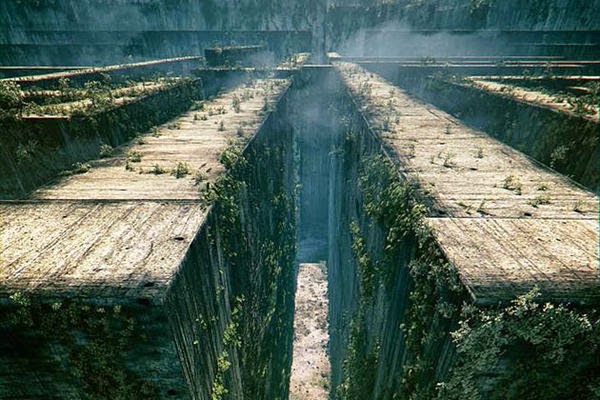 All these movies based on post-apocalyptic-style teen novels are starting to blur together, but I’ll see what I can do. It was a little odd — I mean, you’d expect Hunger Games to attract a range of ages because it was a hugely popular book, and even Divergent attracted more than just the teen crowd, but this time around I really felt like I was in the wrong theatre.

All these movies based on post-apocalyptic-style teen novels are starting to blur together, but I’ll see what I can do. It was a little odd — I mean, you’d expect Hunger Games to attract a range of ages because it was a hugely popular book, and even Divergent attracted more than just the teen crowd, but this time around I really felt like I was in the wrong theatre. I think the average age of the audience was about fifteen. Parents were just dropping off their kids and picking them up afterwards.

Anyway, it starts out more like Lord of the Flies than anything else. Thomas (Dylan O’Brien, who like most of the names I’ll be mentioning hasn’t been in anything else I’ve reviewed or even seen) wakes up in an elevator being rushed up into a place called the Glade, which is full of other teenage boys who all remember nothing but their names, living basically like they’ve been stranded on an island. They build their own shelters, grow crops, and get shipments of supplies via the mysterious elevator once a month, along with another teenage boy. The supplies are labeled WCKD, and yes, you are supposed to think ‘wicked’ when you see that.

The leader of the group, Alby (Aml Ameen), has set up a few simple rules to keep order: Never hurt another Glader, as they call themselves; do your part to help out; and never, but never, go through the giant doors that lead to the huge maze that surrounds the Glade. So of course the only thing Thomas really wants to do is to go out into the maze. Except the only people who do that are the Maze Runners, who are a special kind of crazy. Er, I mean, they’re especially fast and brave. Every day, they run out into the maze when the doors open at sunrise, mapping and memorizing, and come back before sunset, when the doors slam shut. And then the maze rearranges itself, so it’s kind of an uphill battle to memorize anything, though apparently there are certain patterns to the maze that repeat regularly.

Thomas Brodie-Sangster (Love Actually, which I did see, though of course he was an awful lot younger then) is second-in-command Newt, no relation to Newt from Aliens, or at least I don’t think so. Then there’s Ki Hong Lee as the Maze Runner Minho, Blake Cooper as Chuck (who was the new kid until Thomas arrived), and Will Poulter as Gally, the bully of the group. Well, every group has one. Gally thinks that the moment Thomas arrived, everything started changing around and going wrong, and he kind of has a point. Thomas is hardly even settled in when the elevator arrives, weeks too early, minus any supplies but with a girl inside.

She’s Teresa, played by Kaya Scodelario, who was in Clash of the Titans somewhere and was also in some movie called Shank with Aml Ameen. Her presence is unusual enough, but she also remembers the name Thomas, though she doesn’t actually remember Thomas. Thomas himself is having some weird dreams that apparently aren’t really dreams. And in the middle of all this, Thomas goes out into the maze and survives the night, something that no one has ever done before. Out in the maze, you see, are these nasty, ugly cyborg-spider-things that the kids call Grievers, and they think people are tasty.

One of the few actors I recognized was Patricia Clarkson from Shutter Island, here playing Dr. Eva Paige, who appears to be in charge of WCKD. I wouldn’t want to have to deal with an acronym like that myself, but she seems okay with it.

Anyway, the entire movie is basically nothing but a prologue, since it doesn’t end so much as stop. Like Divergent, they’ve still got two more books to get through. So I almost feel a little funny about rating it, since it seems like I haven’t seen the whole thing yet. Still, it was entertaining and didn’t seem as long as it was, and the teenagers I overheard excitedly chattering on the way out all seemed to have liked it, so let’s go with three and three-quarters. It hints at interesting things, at least, and with any luck won’t just turn into some sort of Hunger Games wanna-be. I like the franchise and all, but let’s not get carried away.