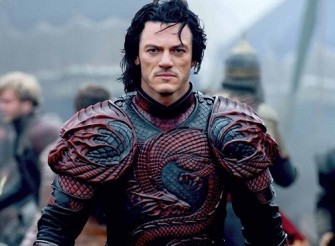 At least this time there’s a different problem with the movie — this one was edited too much, as opposed to last week, when it wasn’t edited nearly enough. It’s too bad there isn’t a way to average them out somehow, except then we’d end up with a movie about a vampire trying to find his missing wife while fending off scary hordes of rampaging Turks and reporters.

At least this time there’s a different problem with the movie — this one was edited too much, as opposed to last week, when it wasn’t edited nearly enough. It’s too bad there isn’t a way to average them out somehow, except then we’d end up with a movie about a vampire trying to find his missing wife while fending off scary hordes of rampaging Turks and reporters.

Luke Evans from the Hobbit franchise does make a good Dracula, as I’d hoped, except the poor guy has to do all the work himself — the script is basically no help whatsoever. I can’t entirely blame the scriptwriters, though — they were somewhat limited in what they could do with the main character. Obviously there’s a lot of artistic license involved, but they stuck pretty closely to the historical Vlad Dracul, including his gruesome nickname “Vlad the Impaler”, so it’s going to be difficult to make a guy called that sympathetic. Too bad they weren’t even more historically accurate and ignored the nickname, since no one really called him that until he was safely dead and couldn’t object violently.

Anyway, the Turks are mostly the villains here, and that’s definitely historically accurate. In the mid-15th century, when the movie is set, the Ottoman Turks seemed likely to take over the known world. Vlad and his brother, sons of a powerful local warlord, were held as noble hostages by the Turks for some years, a common practice at the time, and taught the Turkish language and customs as well as getting a good general education. Of course, here he’s minus the brother and only learned how to fight from the Turks, because they need to be more villainous and all, but at least they taught him to fight really, really well.

Now back home in Wallachia (Transylvania, whatever), Vlad has the obligatory lovely wife, Mirena (Sarah Gadon, who was supposedly somewhere in Amazing Spider-Man 2), and adorable child, Ingeras (Art Parkinson, Game of Thrones). But the Turks are back, led by Sultan Mehmed II (Dominic Cooper, who should be a vampire expert after this movie and Abraham Lincoln: Vampire Hunter), and they want more child soldiers because they’re easier to turn into killing machines. Specifically, they want Ingeras, to make sure that Vlad knows his place as a good little puppet of the Ottoman Empire.

Enter Charles Dance as the creepy supernatural creature hanging out in a cave that you’ve probably seen in the trailers. He’s also in Game of Thrones, playing a Lannister whereas Art Parkinson plays a Stark. He makes Vlad an offer he can’t refuse, though since it involves drinking blood from a skull I think I would’ve said no myself.

It was interesting watching the vampire vs. army battles, but enough ended up getting cut out that it was hard to tell who everyone was sometimes, and if I should be upset that this particular person just got killed or if he wasn’t really a very nice guy anyway. Mostly characters just seem to show up when they have a death scene coming up and otherwise are nowhere to be found. Paul Kaye as the monk Brother Lucian is one of the few minor characters who actually gets to advance the plot while he’s risking imminent, gruesome death. Maybe that’s because he was also in Game of Thrones, though as neither a Stark nor a Lannister as far as I can tell. (No, I don’t know a thing about the series. I’m still trying to catch up on Walking Dead.)

Anyway, it wasn’t nearly as good as I was hoping, though certainly not a total loss. I think I was just expecting too much. I’ll go with two and three-quarters out of five — I can’t quite justify a full three but two and a half doesn’t feel right. My friend at the movie theatre said that Dracula is the character with the second most film depictions, with Sherlock Holmes in first place, which leads naturally to the idea of featuring both in the same movie. If Vlad could get rid of the Robert Downey Jr. Holmes for me somehow, I’d be glad to throw in that last quarter of a point.