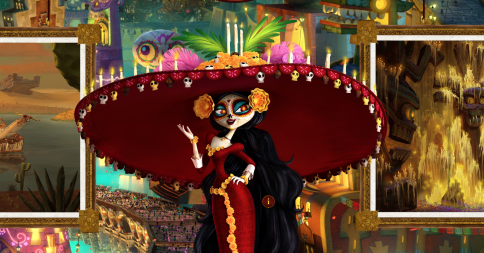 This didn’t quite seem like a kids’ movie, despite being animated — after all, it’s about people dying and going to the afterlife — but kids’ movie it was, and again I felt a little weird about being in the theatre. I really think it would have freaked me out a little when I was a kid, though of course I’m a coward.

This didn’t quite seem like a kids’ movie, despite being animated — after all, it’s about people dying and going to the afterlife — but kids’ movie it was, and again I felt a little weird about being in the theatre. I really think it would have freaked me out a little when I was a kid, though of course I’m a coward. It’s your standard love triangle, set in old Mexico: Manolo (voiced by Diego Luna of Elysium) and Joaquin (Channing Tatum, White House Down) are best friends both in love with the girl they grew up with, Maria (Zoe Saldana, Guardians of the Galaxy). Manolo wants to be a musician, but he has to go into the family business (bullfighting) to prove that he’s a “real Sanchez”, as his father Carlos (Hector Elizondo) keeps reminding him. A “real Sanchez” never apologizes, for example, so I’m thinking that it isn’t exactly something to aspire to.

Meanwhile, Joaquin dreams of becoming a mighty and heroic soldier, like his famous father, who was killed facing off against the mighty bandit leader Chakal (Dan Navarro). And Maria, who tends to run a bit wild and do things like rescue a bunch of animals waiting to be slaughtered, gets her father the General (Carlos Alazraqui) so frustrated that he ships her off to a convent school in far-off Spain. And then things turn particularly strange as two deities get involved. La Muerte (and yes, her name means death, though they don’t say as much in the movie), voiced by Kate del Castillo, is the ruler of the Land of the Remembered, which is basically heaven, and chooses Manolo as her champion in a bet as to who Maria will marry.

On the other side of that bet is Xibalba (Ron Perlman, Pacific Rim), ruler of the Land of the Forgotten, which as the name implies is a pretty grey and horrible place. Xibalba is rooting for Joaquin, and isn’t above cheating to try to make sure he’s the groom, since if he is, Xibalba gets to swap realms with La Muerte. I can’t help but think that eventually, everyone ends up in the Land of the Forgotten, though. I know stories about some of my ancestors, but once you’ve been dead a century or so there isn’t going to be anyone left who remembers you as such. Maybe I’m overthinking this.

When Maria returns years later, she doesn’t look like she should be able to remain upright, since her feet are impossibly tiny and her ponytail looks like it weighs more than she does. But naturally both her childhood friends want to marry her anyway. She’s luckier than most of the minor characters, at least, since they tend to look like they were drawn by Picasso. And she’s basically a Disney heroine, able to fence, fight, and leap tall buildings in a single bound.

Anyway, Manolo gets to travel through both Lands, which are just about as strange as you might imagine, and meets a whole horde of dead Sanchezes, including mother Carmen (Ana de la Reguera, Cowboys & Aliens) and more distant ancestors Luis (Danny Trejo, Machete) and Jorge, who always wanted to sing in the opera. He’s voiced by Plácido Domingo. Yes, that Plácido Domingo. Manolo and friends get a little help from another deity-type called the Candlemaker (Ice Cube, who was in 21 Jump Street with Channing Tatum), who’s vaguely Santa Claus-ish.

I still think the whole concept is a little creepy for kids, but the ones in the theatre didn’t seem too scarred by it, at least. And despite the weirdness it was entertaining, so I’ll go with three and three-quarters out of five. I got the impression everyone was having fun doing the voices for the characters, which is always good. There is singing, though not quite as much as in some Disney flicks, and you’re not likely ever to find Cheech Marin (here voicing Mariachi band member Pancho Rodriguez) singing in one of those anyway.