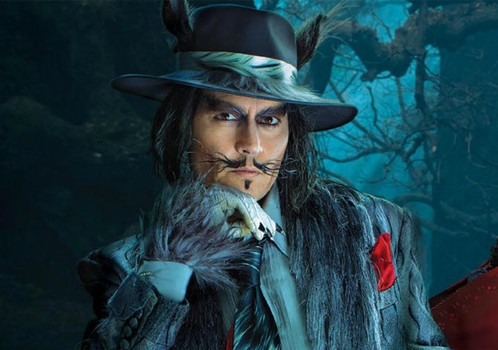 Once upon a time, etc. Okay, yes, I was kinda stuck for an opening line. I like fairy tale mash-ups, but I’m not much of a musical fan in general, so while I was mostly pleasantly surprised overall, I also went in with pretty low expectations. And while Johnny Depp (The Lone Ranger) only really had one scene, thank goodness, I can’t remember it without cringing and I’m not sure I’ll ever get past that.

Once upon a time, etc. Okay, yes, I was kinda stuck for an opening line. I like fairy tale mash-ups, but I’m not much of a musical fan in general, so while I was mostly pleasantly surprised overall, I also went in with pretty low expectations. And while Johnny Depp (The Lone Ranger) only really had one scene, thank goodness, I can’t remember it without cringing and I’m not sure I’ll ever get past that.

But we’ll get to that later. I still have to brace myself a little more before I tackle that. The story with the non-fairy tale characters was pretty good — I like Emily Blunt (Edge of Tomorrow), and while I wasn’t as familiar with James Corden (The Three Musketeers), he seems very likable, too, and he did a good job here. They play a childless couple running the local bakery in a small village on the edge of the Woods of the title, and in time-honored fairy tale fashion, neither of them has an actual name. One day Meryl Streep shows up as the Witch and explains that she cursed their house long ago because the baker’s father was actually the husband from the Rapunzel story who stole from a witch’s garden, making Rapunzel the baker’s sister. I don’t think he ever finds that out, though.

The point is, the stealing made the witch old and ugly, and her curse is why they can’t have children. But if they can gather up four fairy-tale items in the next three days, the witch will be young again and she’ll lift the curse. Since she wants to be young again I’m not sure why she didn’t give them more lead time to find these things, but maybe that’s just part of the fairy-tale rule set.

They need to find a cow as white as milk (the cow Jack (Daniel Huttlestone) trades for a handful of magic beans), a cape as red as blood (Little Red Riding Hood’s, er, hood), hair as yellow as corn (from Rapunzel, played by Mackenzie Mauzy), and a slipper as pure as gold. That’s Cinderella’s, and I don’t know why it isn’t glass except that they wanted to stick with the color theme and gold is safer to rhyme with than glass. And the earliest known Cinderella story, from 9th century China, has a gold slipper.

Anyway, the fairy tale characters all helpfully bring these things into the woods to make them easier to find, though since it’s a big woods that isn’t as much help as you might think. Little Red Riding Hood (Lilla Crawford) screams like a banshee when the baker tries to take her cape, though despite this he still takes over the part of the hunter from the original story and rescues her and Granny after the Wolf swallows them whole, because wolves are like snakes that way. Apparently at least one person thought Johnny Depp could say the Wolf’s lines without making them sound incredibly, horribly wrong. That person could not have been more hideously mistaken. They might as well have put him in a white, unmarked van with no windows in the back.

Gah. Sorry, but I’m still a little queasy about the whole thing. On to happier subjects. At least the rest of the casting was good, though Anna Kendrick as Cinderella was sometimes a bit jarring with her American accent. I know, there are other Americans, like Prince Charming (Chris Pine, Star Trek: Into Darkness) but somehow I noticed her accent the most. And if something about wicked stepsister Lucinda (Lucy Punch, Hot Fuzz) seems familiar, that might be because she was also wicked stepsister Hattie in the partly Cinderella-inspired Ella Enchanted, and was a Cinderella rival in an episode of the Fairy Tales TV series made in 2008. I guess she’s found her niche.

Anyway, discounting the Wolf Incident, it wasn’t a bad movie. I might have gone 4+, but I have to dock them at least a half point for Johnny Depp, so it’ll have to be three and three-quarters. You have to at least not mind musicals, obviously, and also need to be willing to put up with the occasionally annoying children’s roles, and in this case I think it might have been the way the script was written rather than the fault of the actors. Red improves over the course of the movie, but Jack is pretty much a pain from start to finish. But despite that, still a pretty good flick. It wouldn’t have been a total loss even if it had been a lot worse, anyway, since now I have the perfect entry for Ugly in the 2014 year-end wrap up.