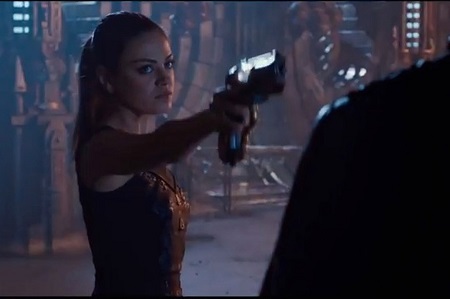 It starts with a girl named Jupiter (Mila Kunis, Oz: The Great and Powerful). No, really, she’s named after the planet. She’s Jupiter Jones, though she was raised by the Bolotnikovs, her mother’s overbearing, extended Russian family. Mila Kunis is Russian, by the way, sort of — she was born in the part of the former Soviet Union that’s now the Ukraine. She speaks Russian, anyway. But Jupiter hates her life because all she does is clean houses for not much money because I think her uncle scoops up all the profits for himself.

Meanwhile, someplace far away, the Abrasax family has discovered that the deceased matriarch of their clan has been ‘reborn’, her DNA reappearing exactly, in the person of none other than our heroine, and everyone’s scrambling to be the first to grab her. Can you imagine how hard it must be to find a specific genetic sequence when you’ve got what seems like an entire galaxy to search through? It’s got to be a few hundred inhabited planets at least. She’s lucky they found her while she was still young.

Anyway, the younger Abrasax son, Titus (Douglas Booth, Noah), has hired a mercenary named Caine (Channing Tatum, The Book of Life) to bring her in. Caine rescues her from the minions Titus’ brother Balem (Eddie Redmayne, The Good Shepherd) has sent to get her, and Jupiter,a regular girl from Chicago, gets swept up into intergalactic politics. I’m not sure if the Abrasaxes (?) are royalty in the usual sense, but they’re rich enough to own planets, literally, so they all get to be called ‘your majesty’. There’s a sister, too, named Kalique (Tuppence Middleton), but she doesn’t get to do much.

The good news is, Jupiter never turns into a damsel in distress, despite being very much out of her element the entire movie. She’s a practical sort of person, which I think probably helps a lot — she doesn’t sit around waiting to be rescued, she does what needs to be done. Sean Bean (Red Riding) is underutilized, but he frequently is. He’s Stinger, one of Caine’s former comrades in arms, and he knows Jupiter is royalty because the bees that he hangs around with (hence the name, I guess?) don’t sting her. Bees don’t sting me, either. Maybe I’m royalty, too!

*ahem* They also have humans engineered to have animal characteristics — Caine is part wolf, for instance — and there’s a minor character who’s part elephant named Nesh, which I’m guessing is short for Ganesha, a very important Hindu deity who has the head of an elephant. So they had fun making this, I’m sure. I just never quite felt invested in the movie, and I still can’t figure out why. It was all interesting, but I never reached the point where I felt wrapped up in the story. Granted, the main villain was a little over the top, rather cartoony in his evil, but that can’t be the whole problem. Maybe it’s the lips again. But flaws aside, it’s still a very fun popcorn movie, different from the usual fare, so give it a try. It’s worth three stars out of five, which isn’t bad. I don’t know about you, but I’d really rather not see Spongebob dominating the box office.