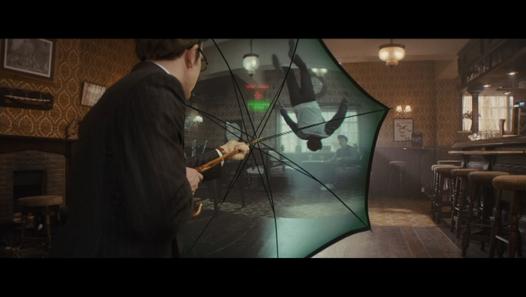 Unlike last week, I know exactly where this movie went wrong, and at least it wasn’t until the very end, but it is kind of a letdown when things go awry so close to the finish line. But it wasn’t all bad news, which can happen all too often this time of year, so could have been a lot worse.

Unlike last week, I know exactly where this movie went wrong, and at least it wasn’t until the very end, but it is kind of a letdown when things go awry so close to the finish line. But it wasn’t all bad news, which can happen all too often this time of year, so could have been a lot worse.

So we’ve got Colin Firth (The King’s Speech) as Harry Hart, a secret agent — not government sponsored, but rather part of an elite group of aristocratic Englishmen who do the missions the government types can’t, for whatever reason. They’re extremely well-funded, though, and have many cool gadgets. The name Kingsmen comes from the fact that the agents all take code names from the Knights of the Round Table (Harry is Galahad, for instance) and are led by a man known as Arthur (Michael Caine, Interstellar). And of course there’s Merlin (Mark Strong, John Carter) who’s in charge of all the gadgetry and other more behind the scenes stuff.

Years ago, Galahad’s life was saved by a comrade, who left behind a wife and young son. Trying to make amends, Galahad promised them a favor when they needed it most. Now the son, Gary Junior (known for some obscure reason as Eggsy and played by Taron Egerton), has become a juvenile delinquent and collects on the favor to get out of jail after stealing and wrecking a car. He isn’t just a juvenile delinquent, though — he’s intelligent and is also pretty good at parkour and sleight of hand. Seeing potential, Galahad offers Eggsy the chance to become a Kingsman.

Meanwhile, billionaire Richmond Valentine (Samuel L. Jackson, Robocop) and his right-hand woman / bodyguard Gazelle (Sofia Boutella, the one with the sword-legs you might have seen in the trailers) are up to No Good. Believing that global climate change can’t be stopped through controlling carbon emissions and such, Valentine has decided to take drastic action and is running around secretly persuading world leaders to join him, which is shockingly easy. I’m not sure a lisping Samuel L. Jackson could convince me to join a book group, much less his ghoulish scheme, but there we are. Maybe he has the power of super-hypnosis or something.

Anyway, the Kingsmen have already lost one man to Valentine’s plans, so clearly Something Must Be Done. Naturally Eggsy gets pulled into the whole mess, despite not actually being a Kingsman yet, and there is much fighting and shooting as well as plenty of gadgets. I was pretty impressed with the action scenes in general — it was generally easy to tell what was going on and who was hitting who, which unfortunately can’t always be taken for granted these days. Colin Firth did quite a lot of his own stunt work and did a good job of it. The female lead, Roxy (Sophie Cookson) gets her fair share of action, too, which I liked. And you can’t fault the acting, which is all solid. It’s very classic James Bond-ish, which means a lot of it is a little improbable, but it’s also fun.

On the other hand, by the last fifteen minutes or so it’s turned into one of those very doubtful Roger Moore James Bond movies, complete with some really silly special effects and a couple of plot holes big enough to fly a space shuttle through. That’s not even mentioning the very dubious ‘romantic subplot’ (for lack of a better term) they also throw in at the last moment. So while I did enjoy at least 90% of the movie, I’ll have to dock a point or so for the ending, which puts it somewhere around three and three-quarters. It’s still a very pleasant surprise for the time of year, and a much better sort of Valentine movie than some others I could mention.