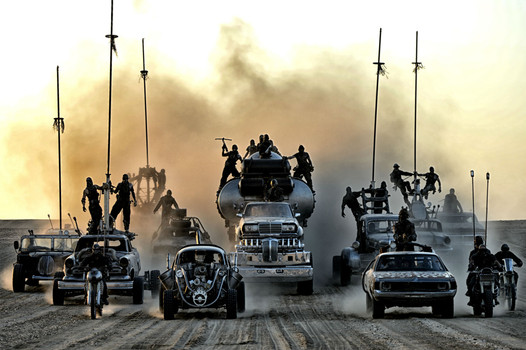 In the post-apocalyptic future, everything is scarce: fuel, water, food, but most of all actual first names.

In the post-apocalyptic future, everything is scarce: fuel, water, food, but most of all actual first names. Only three people have those — Max (Tom Hardy, The Dark Knight Rises), the main bad guy (Hugh Keays-Byrne, who was Toecutter in the original Mad Max), and Angharad (Rosie Huntington-Whiteley, Transformers), which is a Welsh name, though it’s technically The Splendid Angharad because otherwise it might be too normal.

There is some plot, however, so let me cover that before I wander much further. The main bad guy is a mean and powerful warlord called Immortan Joe. So not too normal of a name there, either. The people he bullies — I mean leads — are all on the verge of death from lack of water, I’m pretty sure, but he keeps telling them not to get addicted to water because it’s bad for them. Next thing you know they’ll be expecting to have food to eat. Anyway, fuel is apparently more important, so he regularly sends one of his Imperators — I guess they’re like generals — out on fuel runs.

When Imperator Furiosa (Charlize Theron, Prometheus) gets sent out, though, she goes rogue, along with Immortan Joe’s favorite wives, including The Splendid Angharad and Toast the Knowing (Zoë Kravitz, Insurgent). They would all rather risk horrible death in the wastelands than spend another night locked up in a bank vault. No, really, that’s where they live.

Mad Max himself is… actually more of an afterthought, now that I think about it. I mean, he’s there in a lot of the scenes, he does stuff and kills people, but he doesn’t really seem like the title character. I guess it doesn’t help that he starts out as a prisoner, the ‘property’ of Nux (Nicholas Hoult, Days of Future Past), one of Immortan Joe’s troops who are known as War Boys.

Anyway, everyone collides in various ways, and there’s a big fight over resources and lots of stunt driving and chasing. Oh, and music. Joe inspires the troops by having a guitarist along, plus a bunch of drummers. The guitar is also a flamethrower, though for some reason it sounds best when they’re using it as a club. It’s a lot like watching a two hour music video. I kept half expecting Tom Petty to show up.

I know everyone’s raving about it, and I have to agree that it was visually pretty cool and certainly interesting, but I occasionally found my attention wandering because visually interesting only goes so far. And there are some serious problems with the timeline. Tom Hardy is 37, so it’s safe to assume Max is meant to be about that age, but if he was a (non-rookie) cop before the apocalypse (which he’s supposed to be according to the beginning voice-over) then that apocalypse couldn’t have happened much more than 15 years ago.

I can go three out of five, but that’s it. I know it’s good that it has strong female characters and all, but strong female characters and plot are not mutually exclusive, whatever the writers here seemed to think. But it’s apparently breaking the box office and I almost hate to look at the imdb rating, so what do I know? I think I may be a minority of one this time. But I’m pretty sure that all this success is going to do is encourage the making of a lot more two hour music videos, unfortunately.