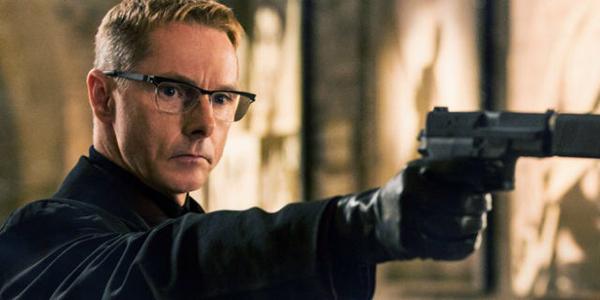 I wasn’t particularly tired or anything, I just couldn’t get interested in the movie. Of course I did skip one or two in the series, but everything was pretty self-explanatory so that wasn’t the problem, either. It was like a Bond movie without any of the charm, because I’ve never thought that Tom Cruise (Edge of Tomorrow) could actually pull off being charming. Others in the audience did seem to be enjoying it more than I was, but at one point I realized that Tom Cruise’s nose looked larger than I remembered and then that beak of his was all I could notice at times.

Anyway, Jeremy Renner of the Avengers series was there as William Brandt, the guy in charge, not that that does him any good with a bunch of people who ignore all orders and half the time don’t even seem to bother telling anyone what they’re planning. Also, his suit never looks quite right for some reason. The computer guy, Benji (Simon Pegg of Star Trek) is the closest they’ve got to a ‘by the book’ sort of person and even he prefers making wisecracks and playing Halo when he’s supposed to be working. Ving Rhames (Piranha 3-D) is there, too, but he doesn’t do a whole lot. Perhaps he’s wisely distancing himself from the series.

So let’s see. The villain is Solomon Lane (Sean Harris, Prometheus), except he wasn’t at all scary. I got the impression he wasn’t really trying, though. He looked as bored as I was most of the time. Working for him — or maybe working for MI5, or maybe both or neither, is Ilsa Faust (Rebecca Ferguson, Hercules). I’m sure they were going for an air of mystery with her ever-shifting alliances, but it started to bother me about halfway through. She did a pretty good job despite everything, though. I was impressed.

Alec Baldwin (The Good Shepherd) as Important CIA Person Alan Hunley is sort of a secondary villain since he’s gotten the team officially disbanded, though I’m not sure why he thought that would stop them or even slow them down. They still have every spy gadget they were ever issued, for one thing, though I’m betting they were supposed to turn those in.

Two and three-quarters is the highest I can go, and at least one of those points is just because Ilsa is pretty and the actress somehow manages to make her likable despite everything. I can’t even say that the plot eventually turns into a lot of explosions and shooting, because strangely there’s not a great deal of either. There’s a pretty good chase scene and the part at the opera has its moments, but there aren’t a lot of really memorable fights, either. In short — I know, too late — there weren’t a whole lot of thrills involved, which is odd for an action / spy / thriller sort of movie. Maybe they’ve heard about The MCND’s First Law of Sequels and are trying to disprove my theory.