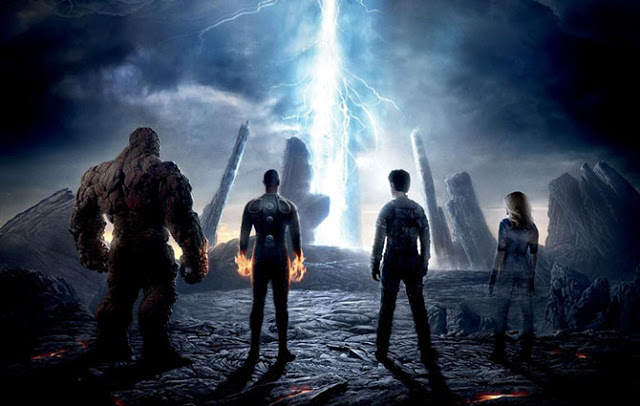 Right. I’ve decided to pretend that this isn’t a Fantastic Four movie, since it could have just as easily been about any random group of people getting weird super-powers. Mind you, even the most successful self-deception isn’t going to make this into a good movie, but at least it makes it less painful to my childhood memories of reading the FF comics. And Michael Bay wasn’t even involved.

Right. I’ve decided to pretend that this isn’t a Fantastic Four movie, since it could have just as easily been about any random group of people getting weird super-powers. Mind you, even the most successful self-deception isn’t going to make this into a good movie, but at least it makes it less painful to my childhood memories of reading the FF comics. And Michael Bay wasn’t even involved.

So let’s see. There’s a 5th grade child prodigy named Reed who blacks out his entire neighborhood while trying to create a teleportation machine which he calls a ‘matter shuttle’ in order to be confusing. He gets help from a classmate named Ben whose horrible family owns a salvage yard. When they’re 18 (I think), they’re played by Miles Teller from the Divergent series and Jamie Bell from Man on a Ledge, respectively. They’re competing in a science fair with their matter shuttle and nearly black out half the eastern seaboard.

Then Dr. Franklin Storm (Reg E Cathey) and daughter Sue (Kate Mara) show up and inform him of how close he came to disaster, though he did manage to solve the problem the Storms are having with their own ‘matter shuttle’, namely the return voyage, pretty much completely by accident. But this is apparently just the qualification that they’re looking for and they offer him a full college scholarship plus a job, so I guess it really is better to be lucky than good.

Dr Storm’s son Johnny (Michael B. Jordan, Chronicle) gets hauled in to help when he crashes his car drag racing, and old friend Ben gets hauled in by a slightly drunken phone call, and then things explode and poof, people have super powers. Oh, and there’s also some guy named Victor von Doom from Latveria (Toby Kebbell, The Counselor) who is nothing to do with any other Victor von Doom from Latveria that you may have heard of. The actor is British but they made him sound American even though sounding English would have made more sense. Not that it really matters since he doesn’t seem to care one bit about Latveria, which is completely wrong. I mean, it would be wrong if this was a Fantastic Four movie.

That was close. Anyway, despite supposedly having only four main characters, Subjects 2 and 3 (Johnny and Ben) don’t get a whole lot of lines or screen time, though they may have done better before the reshoot, which I understand was considerable and therefore a Very Bad Sign. Maybe there were fewer plot holes before, too, like where Victor managed to find his cape and why this other dimension that they kept teleporting to sometimes had a breathable atmosphere and was just fine to run around on wearing regular clothes and sometimes required protective suits and oxygen gear. Also, Victor looked like plastic and had super powers, except Doom is only supposed to be a gadgeteer villain. He did get one of the best unintentionally funny lines, though, when he said “There is no Victor, there is only Doom,” because it sounded so much like, “There is no Dana, only Zool” from the first Ghostbusters movie.

So scoring: start with five, then take one away because they turned Reed into a child prodigy when he’s supposed to be middle-aged and one for the fact that by the end there was no reason for anyone to be doing any of the things they were doing aside from ‘ the script said so.’ I’ll give them back a half because I did actually like some of the scenes with Reed and Ben, but then I have to subtract another one since they did bad things to Sue, like making her wear that strange wig for half the film. So two and a half… except now I have to deduct another quarter since my defense mechanism has failed, so two and a quarter. In the words of another disgruntled film-goer, “Okay, 20th Century Fox ruined that movie.”