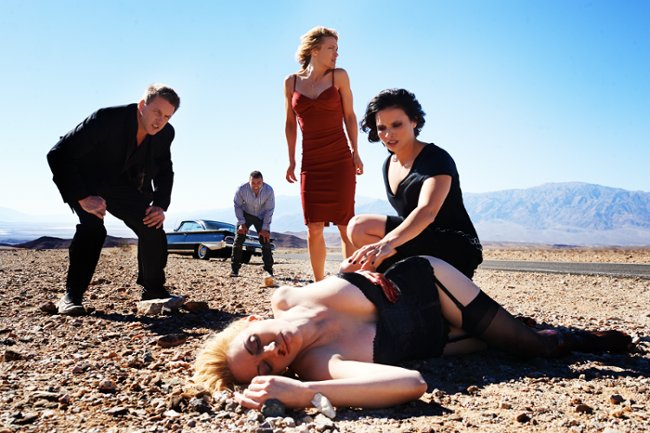 Since getting my certificate of completion from the TCM online course on noir movies, I’m possibly a slightly more professional critic, though admittedly I wasn’t sure that being better able to categorize what ‘film noir’ means would be a great deal of help in the modern movie industry. It turns out that it can be, though, as in this particular movie, Death Valley (trailer goodness here).

Since getting my certificate of completion from the TCM online course on noir movies, I’m possibly a slightly more professional critic, though admittedly I wasn’t sure that being better able to categorize what ‘film noir’ means would be a great deal of help in the modern movie industry. It turns out that it can be, though, as in this particular movie, Death Valley (trailer goodness here). It echoes Sunset Boulevard at one point, and the characters are… morally ambiguous, let’s call it, which is very noir. You start out thinking one thing about them and end up with a completely different idea.

To start with, though, it’s just about four people driving unsafely along a desert (and deserted) highway. It’s unsafe because the driver, Billy Rich (Lochlyn Munro, Tomorrowland) is drinking tequila while he drives, and the highway is deserted because it isn’t technically open yet. But Billy is an Important Person in Hollywood, a director with a TV show that’s just gotten big, so the rules don’t apply to him.

This makes him very attractive to ambitious actress Annie. She’s played by Katrina Law, who was in Spartacus and is also in Arrow, like most of the cast here. It’s easier to say who isn’t in at least one episode of Arrow, in fact — Jeremy Ratchford as police officer Lucas and Victoria Pratt as Jamie, another hapless passenger, though Victoria did guest star in an episode of Cold Case where Jeremy played police detective Nick. Okay, got all that? It’s almost a family reunion!

Also along for the unsafe ride is Roy, Jamie’s husband (Nick E. Tarabay, Star Trek: Into Darkness). It turns out he and his wife are just regular people — well, sort of — who won a contest to go to LA for a charity party at which they met Billy and Annie, who are engaged despite having known each other for about a day. They’re heading to Vegas for a quickie wedding, with the other two as witnesses, presumably.

Of course the car crashes, though surprisingly it isn’t entirely Billy’s fault. Seeing a half-naked woman leap out into the road and shoot at your car is going to freak out even the most sober and attentive driver. When the dust settles, the mystery woman is lying dead on the side of the road, with the car in similar shape several yards away, and the four travelers have some difficult decisions to make.

That’s when everything starts to unravel, bit by bit. The heat is getting to all of them, and though Billy makes a big deal about staying hydrated, the champagne he has in the trunk isn’t going to be much help with that. Who wants warm champagne anyway? And Death Valley is basically the title character — the desert is like another, scary person, standing aside watching everyone else argue and make all the wrong decisions. Jamie says they should stay by the car, but no one else agrees and they head off in search of the old highway where there might be some traffic.

But it’s a long, rough walk that none of them are really prepared for, and inevitably the stress is too much. Secrets come out, accusations fly, and when someone else turns up dead the survivors don’t know who or what to believe. The buildup is slow and tense, and before you know it the characters have completely lost control — if they ever really had it to begin with.

The explanation that ties up the loose ends is a little rushed and feels like an afterthought, but I think that may have been what they intended — for one thing, the explanation isn’t really the point of the film, it’s the journey the characters take, and that doesn’t only refer to all the walking they do. (Though it is an awful lot of walking. My feet were getting tired just watching. And walking in a place called Death Valley sounds particularly terrible, doesn’t it?)

I’ll go with four and a half out of five. The landscape is fascinating and makes a great setting — the whole film is a study of light and dark, in more ways than one, and the sharp desert shadows are the perfect (noir) way of showing that. The acting is solid and while, as mentioned, there are a couple of places where the script feels a bit rushed, for the most part the tension builds up slowly until the end, when everything starts happening all at once. That’s probably almost exactly what it’s like when a rattlesnake sidles up and bites you, now that I think about it.