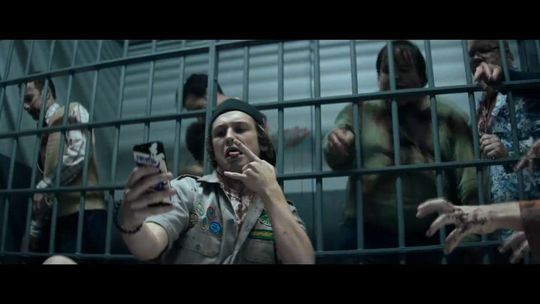 I know, I know, it’s another zombie movie already, but hey, it’s Halloween. And it’s considerably different from Survivors, anyway. Somehow blending horror and comedy often seems to result in the sort of comedy I can’t discuss in detail in a family-friendly review, and this movie is no exception, but in-between the cringe-worthy jokes it was a pretty fun movie.

I know, I know, it’s another zombie movie already, but hey, it’s Halloween. And it’s considerably different from Survivors, anyway. Somehow blending horror and comedy often seems to result in the sort of comedy I can’t discuss in detail in a family-friendly review, and this movie is no exception, but in-between the cringe-worthy jokes it was a pretty fun movie.

There are these three Scouts — not Boy Scouts, since I’m sure they couldn’t get permission to use the actual Scout stuff. No, these kids are in the American Scouting Association, apparently the only three members of Troop #264 in Deerfield, California. Augie (Joey Morgan) is the Squad Chief and clearly the most into the whole scouting thing. Ben (Tye Sheridan, who’s going to be playing a young Scott Summers in X-Men: Apocalypse) is less sure about the whole thing, and has let the even less-thrilled Carter (Logan Miller) talk him into quitting — except Ben doesn’t have the heart to tell Augie. Augie has just gotten his Condor Badge, you see, and they’re having a camp out and ceremony for the occasion with Scout Leader Rogers (David Koechner, Paul).

The first problem is that Carter has just gotten an invitation to a party the cool seniors are throwing that same night. Then there’s the fact that Ben has a secret crush on Kendall (Halston Sage, from the Goosebumps movie that I successfully avoided), who just happens to be Carter’s sister. Carter’s neighbor is the scary cat lady Miss Fielder (played by the ever-awesome Cloris Leachman) who is very threatening with those garden shears. Oh, and a zombie plague has just been unleashed.

Carter gets nearly all of the really horrible jokes since he’s basically a caricature of a hormonal teenager. Seriously, however attractive a woman might have been alive, once she’s been zombified that should be that, except Carter doesn’t agree. I was a bit surprised that he didn’t spend more time hitting on Denise, the stripper — sorry, cocktail waitress — they join forces with. She gets to save the day quite a lot. In fact, she’s practically a MacGyver, given her habit of showing up at exactly the right moment. There are a lot of coincidences in the movie in general, though, and just about everyone gets to run to the rescue at least once. Even the klutzy Augie has his moments occasionally.

All in all, it was something of an experiment, I think, as partly shown by the fact that it was limited release and I had to go out of town to see it. And… it didn’t entirely work, but it was a good effort and it’s nice to see more mainstream studios trying something different. So I’ll go with a solid three and a half even though it’s really more just a three. The acting was pretty solid, which was a pleasant surprise with so many young actors involved, and there were some good moments that helped me forget the more unfortunate jokes. If you do go to see it, though — and I think it would be a fun thing to see with a bunch of friends — just be prepared to really, really suspend your disbelief.