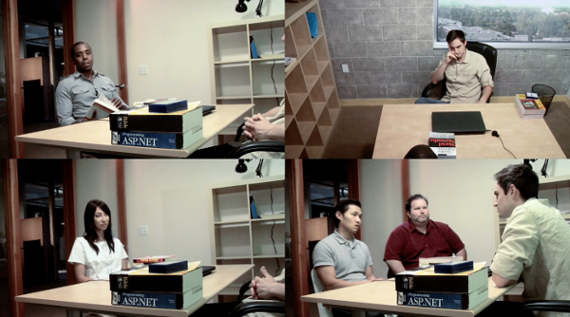 The Code in Nightmare Code does refer to programming, and a knowledge of coding might allow you to find some interesting references here and there. But luckily all you really need to know for your movie-watching enjoyment is what it’s like to face a deadline you’re not sure you’ll be able to make, and I think anyone who’s ever gone to school has suffered through that.

The Code in Nightmare Code does refer to programming, and a knowledge of coding might allow you to find some interesting references here and there. But luckily all you really need to know for your movie-watching enjoyment is what it’s like to face a deadline you’re not sure you’ll be able to make, and I think anyone who’s ever gone to school has suffered through that. I still get those dreams where it’s finals week and I realize that I entirely missed one of my classes and now can’t even find the room that it’s in, so the whole deadline stress thing can take a while to work its way out of your system. And here we have deadline stress to the tenth power.

Programmer Brett Desmond (Andrew J. West, The Walking Dead) has just been asked to take over as head programmer on a project for Opt-Dex. I don’t think he’s any relation to Norma Desmond, but that would be a fascinating connection. Anyway, the project is close to the finish line, but the previous lead programmer, Foster Cotton (Googy Gress) is no longer available. All right, he snapped and shot several of his co-workers before turning the gun on himself.

All of this was recorded from multiple angles by cameras throughout the offices (so yes, there are a couple of very gory scenes). These aren’t just security cameras, though, they’re part of the project. The company is working on a program called ROPER which is designed to analyze — and even predict — human behavior based on facial cues and body language. This isn’t too far-fetched; it’s possible to study microexpressions on faces that can give away volumes, though I’m pretty sure that it can’t be done by a computer yet since it isn’t always an exact science. The point is, the project requires lots of footage of people interacting to create the necessary database, so everyone is nearly always on camera. Yes, that does get creepy.

Some of the original team is still alive and (shockingly) still working there, including Louis and Paul (Jamie Parker and Ray Trinh, respectively), Kevin (Reginald Huc) and Nora (Mei Melançon, X-Men: Last Stand). Nora does her best to keep everyone focused despite the stress, especially Brett, who’s also facing legal trouble from his last job, but it’s an uphill battle as stranger and stranger things start happening. When new versions are uploaded bugs that were fixed weeks or even months ago are back. Video of things that never happened starts surfacing. And Brett, having foolishly watched the footage of Foster’s rampage, thinks that something that should be impossible was caught on camera.

For much of the movie, the screen is split into four parts, usually representing four different angles of the same scene. I was sure that this would drive me crazy, but as it turned out it was fascinating. If you watch closely they don’t always match precisely and you quickly learn not to trust everything the computer cameras — the cameras in the movie, that is — show you. By the end, you’re not sure you can even trust what the characters are seeing, or seem to be seeing. I’d better stop that particular train of thought before I completely confuse myself. I know, too late.

Four and a half out of five. Brett seems egotistical and self-centered, and in some respects he is, but he’s also a guy who’s had a rude awakening and is trying to do right by his wife and daughter (Caitlyn Folley and Isabella Cuda), so you feel for him as everything starts to unravel and he tries to hang on any way he can. Nora has her own secrets, though helpfully she swings a mean baseball bat. But of course ROPER is the biggest mystery of all, and he’ll leave you wondering. You’ll especially be left wondering if you’ve watched this on your computer the way I did.