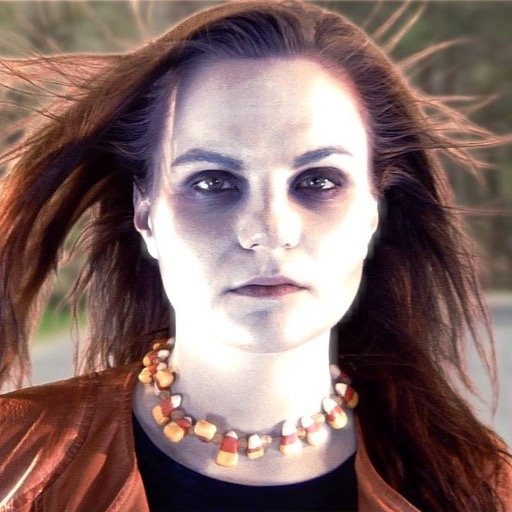 When Luke (Nicholas Zoto) is out playing football with a couple of friends — and I use the term loosely since they’re really pretty awful to Luke — he meets a teenage girl (Catherine Kustra) after Billy and Dom decide they’re done teasing him for the day and leave. The girl is dressed as if for a Halloween party, complete with candy corn necklace, and they bond over some actual candy corn.

Luke’s mother Marie is naturally a little surprised to learn that a ten-year-old has a new friend who’s a teenager, but when she also learns that the ‘Halloween Girl’ is named Charlotte, she’s distinctly uneasy. Marie has also recently been laid off from her job, and as a single mother is trying to hide their possible impending poverty from Luke. Her friend Karen (Carol Anne Raffa) is pretty sure Luke already knows, and you can be pretty sure that she’s right because that’s the kind of thing kids always know, shocking all the adults around them.

Anyway, Marie confides to Karen that Luke once had a sister named Charlotte, killed on Halloween, though of course the two women decide that it’s only a coincidence because they don’t realize that they’re in a movie and there’s no such thing as coincidence. But Charlotte is working her way more and more into Luke’s life, even invading Marie’s dreams, and while the Halloween girl doesn’t seem to mean Luke any harm, she definitely wants something…

Here’s where you can really tell this is a review of a short film because I can’t say anymore without getting into spoiler territory. The acting from the two football-playing “friends” is a bit stiff, but the rest is solid and the pacing is good, something that short films can have trouble with. But despite the 18-minute run time, the characters are well-drawn and the dialogue well-written, so I’ll go with four out of five. You might be able to guess at the ending twist like I did, but it’s still a fun watch that makes you think a little — it’s psychologically creepy rather than out and out jump in your seat scary. And while being a huge fan of Halloween might be helpful it is definitely not required.

Trailer is available here, and info to rent or buy is here!