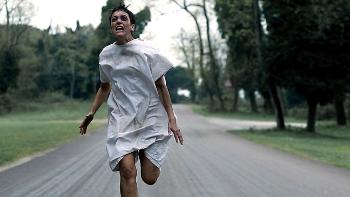 *ahem* First, we meet Alice. No, not that Alice, or even this Alice. This is Roberta Strata as Alice, and she’s just gotten a frantic call from her husband warning her to stay in the house with their young daughter and not let anyone in. It isn’t much of an emergency plan, but then, not all of us have a full survival plan mapped out for the zombie apocalypse. I should really get working on mine. Anyway, the ‘stay inside’ plan doesn’t work out, and Alice heads towards the city in search of her husband. Except she quickly learns that the city is already overrun. Whoops.

Fast-forward a few months, and a now obviously pregnant Alice is traveling with fellow survivors Peter (Michael Segal) and Stephen (Marius Bizau), or maybe ‘wandering aimlessly’ is a better description. Meanwhile, Rooker (Aaron Stielstra) is in charge of some sort of refuge, and by refuge I mean a prison where he likes to single out certain people for torture. His backstory includes childhood abuse, but honestly I didn’t think it made the character any more sympathetic. He’s just rotten.

One of the aforementioned prisoners (Désirée Giorgetti) doesn’t even get a name, poor girl, but she seems to be a favorite torture target. Then there’s Ben (David White), who’s much too nice to be involved with this refuge place, but he somehow ended up there anyway. He’s also a terrible liar, so you know he’s in big trouble. You just need different skill sets in the post-apocalypse world. But Alice, Stephen, and Peter have heard about an island where there is no infection, and they decide to try for it, though of course Rooker has other ideas.

It’s technically an Italian movie, despite everyone doing their best to sound like they’re from the U.S. Aaron Stielstra actually is from the U.S., but most of the actors are Italian. They also tend to make a habit of appearing in zombie movies, like Zombie Massacre 2: Reich of the Dead) so maybe they’re all friends of Uwe Boll, who’s so fond of producing B horror movies in general. It must be fun to get to work with your friends all the time on these kinds of projects.

Basically, it’s a decent zombie movie but I think you have to be a pretty big zombie fan to really enjoy it. I can’t really go more than three out of five, but it was a decent watch. They don’t even try for anything new — I was frequently reminded of other movies — but there are some nice touches here and there and the acting was quite good all around. The actors did have an extra challenge at times, as there were several incidents of the characters doing blindingly silly things just to keep the plot moving. I know, that’s standard horror film stuff, but somehow it just bothered me more than usual. I mean, really. Who drives around a zombie wasteland with the windows rolled all the way down?