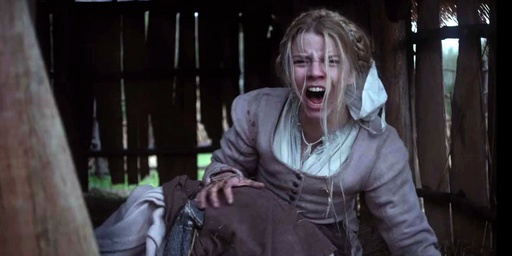 The Witch points that out right away, starting right in on clergyman William (Ralph Ineson, Kingsman: The Secret Service, though since he’s credited only as ‘Policeman’ I suspect he isn’t easy to spot) being banished from his home village. Of course his family has to share this banishment, though his wife Katherine (Kate Dickie, Prometheus) doesn’t seem all that thrilled with it. This is 1630, after all, and surviving even in a town is no picnic. Surviving out in the wilderness is a truly scary prospect. (Kate was also in Game of Thrones with Ralph Ineson, though don’t ask me if she has any scenes with him. Given the size of that cast, they might not ever have been anywhere near each other even if they were in all the same episodes.)

Anyway, eldest child Thomasin (Anya Taylor-Joy) is probably the most shocked at this sudden change, but like any Puritan child she isn’t really allowed to complain. William is actually a lot less harsh with his kids than he should be, historically speaking, but you can’t be too accurate if you want characters that are at least somewhat sympathetic. Younger brother Caleb (Harvey Scrimshaw) is already preparing to be a grownup, going hunting with Dad and generally being one of the more mature people in the house.

Then there are the twins, Jonas and Mercy (Lucas Dawson and Ellie Grainger), who look about six or seven years old. Mercy is very badly-named, by the way, because a more evil little girl would be hard to find. I’m fairly sure that when no one’s looking she amuses herself by tormenting small creatures. She doesn’t listen to Thomasin at all and only barely obeys her mother, so in 1630 she would have been burnt at the stake for sure. Then there’s the baby, Samuel, who mysteriously disappears on an otherwise ordinary afternoon.

That’s bad enough, but Mercy (unsurprisingly) quickly makes things worse when she petulantly claims to be the Witch of the Wood and sets off a family power struggle. It also isn’t surprising that tempers flare; all of them are jammed into a two-room house, the harvest is failing, and the woods around them are awfully creepy — and I usually like woods. The psychological horror here is top-notch, and even the kids give pretty impressive acting performances.

You know there’s a ‘but’ coming. As great as the slow buildup is, as dramatic as the accusations and counter-accusations are, the film goes flailing out of control in the last fifteen minutes or so. And I really don’t like it when a movie does that, so when the credits started I was sitting there stunned, and not in a good way.

I can’t entirely dismiss the first hour and fifteen minutes of the movie, though, so it still gets a solid three and three-quarters out of five. Four seems like a bit too much, and yes, I did accidentally see that most critics are raving about how wonderful it all is and it’s the best horror movie of the decade, etc. It was an interesting idea, and handled differently I’d be raving with everyone else. But, as often happens with horror movies, it showed us too much instead of letting us wonder and our imaginations run wild.