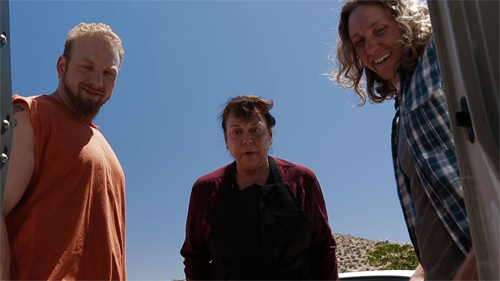 The desert does strange things to people, it seems. Even in the short term it can mess you up, so just imagine what can happen if you actually live there, like many of the characters in Betrothed do. However bad you’re thinking, it’s worse.

The desert does strange things to people, it seems. Even in the short term it can mess you up, so just imagine what can happen if you actually live there, like many of the characters in Betrothed do. However bad you’re thinking, it’s worse.

The movie at least does you the courtesy of letting you know right away what you’re in for. They leap right in to the kidnapping, murder, and mayhem, and the mayhem involves plenty of blood besides. Chainsaws are also used, because as we quickly discover, the Cooper clan doesn’t do anything halfway. Matriarch Ginnie (Bunny Gibson) is probably the scariest Cooper. Isn’t that always the way it goes? Mind you, her husband Bud (David Reynolds) is also pretty scary, but he doesn’t get nearly as many scenes.

Anyway, sons Nate (Adam Dunnells) and Adam (Jamie Cline) need wives, so of course they have to kidnap them because no woman in her right mind would want to live 150 miles from nowhere with a mother-in-law like that, even aside from all the psychological issues the boys have. Technically Nate already has a ‘wife’, the previously-kidnapped Emily (Nailya Shakirova) — though it seems to be just Mom performing the ceremonies, so not a legal wife — but mostly Em doesn’t count because she hasn’t had a baby yet.

Then they kidnap college student Audra West (Mikayla Gibson) outside a convenience store. This is why you never offer to pick up pancake mix at seven in the morning. But mom Joan (Amy Lindsay) knows right away that something’s wrong and pesters the police until she finds Detective Gordon (Trae Ireland), who also has a daughter and is no match for Joan’s guilt trip. As it happens he isn’t much of a detective, but better than nothing, right?

Now, Audra does a lot better than your traditional damsel in distress, which I liked. She’s good at going along with the Coopers’ rules where necessary to keep herself in one piece and also plays Adam like a fiddle when she wants to get some information. But this is also one of those movies, where even if the heroes are entirely sensible and logical nothing ever goes their way. The Cooper clan is apparently all but indestructible, and in a slasher movie it really is better to be lucky — or more precisely really tough — than good.

On the plus side, the actors all had fun with it. Bill Oberst Jr. as Lester doesn’t have a lot of scenes but is funny and creepy at the same time, for example, and Mama Ginnie is marvelously over the top. The script was decent (if unremarkable), with lots of shout-outs to some classic slasher movie themes, and it isn’t a bad popcorn movie. But thanks to the Coopers apparently having all the luck it was frustrating to watch at times, and I really can’t go any higher than three out of five. The end is rather obviously gearing up for a sequel, though, and maybe that one will have more Lester.