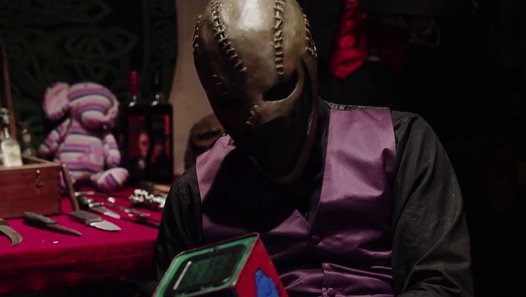 The city is being terrorized by a mysterious killer known only as The Laughing Mask. The death toll is rising, but the murderer leaves no clues and the police are stymied. But one man, who has lost his wife and child to this evildoer, is determined to find his own brand of justice!

The city is being terrorized by a mysterious killer known only as The Laughing Mask. The death toll is rising, but the murderer leaves no clues and the police are stymied. But one man, who has lost his wife and child to this evildoer, is determined to find his own brand of justice!

Yes, all you’d have to do is swap Red John for The Laughing Mask (here played by Jeff Jenkins, though he could be anybody under that mask) and you’d have a perfectly good description of The Mentalist, but there are no con artist tricks here. The grieving husband and father is Jake Johnson (John Hardy), a writer whose wife Jaycee (Inge Uys) was killed and whose daughter Barbara (Arisia Aguiar) has been missing ever since her mother’s death.

The lead detective on the case, Kate O’Malley (Sheyenne Rivers), is apparently the only competent officer in the entire Orlando police department, but she’s just getting back on the case after being gone on a few months’ leave, for mysterious reasons. Fellow detective Alejandro Cordova (Gabriel Lee) says she’s a burnout and is gunning for her job. I don’t know if she counts as a burnout, but she’s certainly bitter and sarcastic, especially to her ex-husband when they’re fighting over their daughter. Kate’s also a serious workaholic who thinks vacation is the worst punishment ever.

And she’s gotten to be friends with Jake, who has managed to track down a connection among The Laughing Mask’s three latest victims: all of them received payments from someone called Lopez shortly before their deaths. He’s rumored to be the new crime kingpin in town, running several illegal enterprises through a strip club called The Barn, though he hasn’t yet been arrested and is still very mysterious. But finding this Lopez shouldn’t be too hard, right? It’s only the 16th most common surname in Florida.

In true movie cop fashion, Kate takes appalling risks to catch the killer, though she almost has to since she isn’t getting a whole lot of help. Jake taunts the killer by making fun of him in a book he wrote about the case, then sits at home surrounded by assault rifles waiting for the Laughing Mask to come to him, while the rest of the police force seems to range from “well-meaning but not very bright” all the way to “completely corrupt”.

The Laughing Mask is also obsessed with everything old, from 1930’s music like “It’s a Sin to Tell a Lie” and “The Boogie Woogie Man” to those creepy old black and white cartoons that I could never watch as a kid. I can barely watch them now. I think it was also partly inspired by a 1916 silent movie serial called The Iron Claw, which is mostly lost today but seems to have featured a villain called The Laughing Mask.

While it was a bit uneven at times — they sometimes gloss over plot points that would have been nice to know, and it seemed pretty doubtful, to say the least, that they had zero forensic evidence from multiple crime scenes — it was otherwise a good thriller. It’s definitely gruesome, as the Mask comes up with some truly horrific ways to torment his victims. Granted, most of them aren’t exactly angels, but no one deserves such terrible, carnival-themed deaths.

But the ending has a nice twist, and I’ll give it four out of five despite the cartoons freaking me out. And remember, in the immortal words of the song, “So, better look out, someone’s about, hauntin’ the town, better beware, better take care, you may meet the boogie woogie boogie man.”