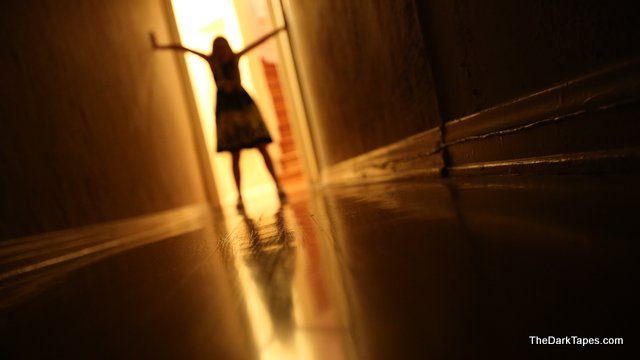 There are four stories tangled together in The Dark Tapes, all done in found footage format and all about things that go bump in the night, but they certainly aren’t four standard ghost stories, not by a long shot. If you want something suspenseful and creepy but otherwise aren’t sure of what genre you’d like, this is the film for you.

There are four stories tangled together in The Dark Tapes, all done in found footage format and all about things that go bump in the night, but they certainly aren’t four standard ghost stories, not by a long shot. If you want something suspenseful and creepy but otherwise aren’t sure of what genre you’d like, this is the film for you.

In one storyline, physics professor Martin (David Rountree) and his teaching assistant Nicole (Cortney Palm) are in search of demons, though they prefer to call them trans-dimensional beings. The stuff of nightmares, they haunt us while we sleep. But there’s nothing supernatural here, the professor insists. It’s all science — time dilations, inter-dimensional travel, and other things that would fit right into a Doctor Who episode.

Then there’s David (Stephen Zimpel) and his wife, Karen (Shawn Lockie). David has just surprised her with a new house, which seems a terribly risky sort of surprise at best, but she loves the place. It’s a large house with a gorgeous view, but there are also hints that it was suspiciously inexpensive. Soon the strange noises start, objects move by themselves, and some unseen force even starts to get physical.

They post a video plea for help from ghost hunters, which is answered by the Pacific Investigators of Paranormal Phenomenon. The leader is Susan (Jo Galloway), with tech assistants Geoff (Jonathan Biver) and Cameron (Clint Keepin). They believe there are two spirits, one tormenting the other and holding it prisoner, and Susan is convinced that this is the break they’ve been waiting for. It’s a very strange job, ghost hunting.

Meanwhile, Sindy (Anna Rose Moore) and new girlfriend Caitlin (Emilia Ares Zoryan) are making a little extra money on the side by performing webcam shows, and they already have quite a following. Caitlin grew up sheltered in a small town and is deliberately trying to shed that image under Sindy’s guidance. Well, more like command, really. Sindy keeps pushing for more, and Caitlin isn’t sure about going that far. Worse, she’s having blackouts, losing entire evenings, and there’s no apparent explanation.

Last but certainly not least, Amanda (Brittany Underwood) is having trouble sleeping. More precisely, she’s being kidnapped and tortured every night by things she can’t quite see and definitely can’t capture on camera, at least not in the usual way. Convinced that no one will believe her — with good reason — she tries to fight them herself, but their technology stymies her. Slowly, she confides in her best friend Ryan (Jake O’Connor) and finally finds a way to beat her tormentors. Or does she?

Found footage is getting a bad reputation, but here the reasons for the constant filming are somewhat more solid than most. A couple of times you have to suspend some disbelief — would you really hang on to the camera when you’ve just found a gruesomely dead body? — but again, it does better than most at that and it isn’t too jarring. Cam girls Sindy and Caitlin have perhaps the weakest entry of the four, but even so it’s still a pretty good story.

I watched this movie late at night in the house by myself, and had more than a few unsettling moments when I was sure I’d heard something in the other room. It’s an ambitious film, but it works beautifully. Despite the differing types of horror and the necessary switches from story to story the format holds it together well and it never feels too choppy. Unusually for a horror movie there’s some good characterization and strong female roles — Amanda in particular is the opposite of a damsel in distress. I couldn’t take my eyes off the screen… except when I was checking to make sure nothing was sneaking up on me.