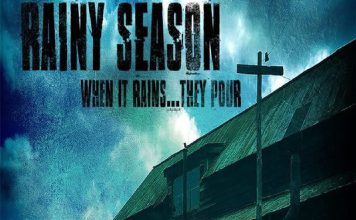 On a warm June day in the 1970’s, a young couple drives along isolated, wooded roads en route to the small town of Willow, Maine, where they’ve rented a house for the summer. It’s a quiet, sleepy sort of place, but that’s what they want, since John Graham (Brian Ashton Smith) is a writer and wants time to work on his craft. It’s less clear how wife Elise (Anne-Marie Kennedy) will occupy herself, however. The premise is somewhat like The Shining — not surprising since both plots sprang from the dark corners of Stephen King’s mind — but in this case there’s neither a large hotel nor a small boy to look after.

But Elise is certainly troubled, and perhaps hopes that this time away from it all will be therapeutic even though the locals are a bit odd. Henry (Kermit Rolison), for example, is sometimes friendly and sometimes a master of the awkward stare. Laura (Jan Mary Nelson), on the other hand, is somewhere between friendly and panicked, telling them it’s the rainy season and urging them to spend the night at a motel instead of the perfectly good house they’ve already paid for. It’s a strange welcome, to say the least, and Elise and John hardly know what to say.

They’re determined to stay in their house, though, and it’s hard to blame them. Certainly it seems like a nice house, if badly lit, but that’s standard for horror movies. The poor kids have barely started to settle in when the movie suddenly starts rushing towards its ending, dragging them headlong with it. It’s a good ending — as wry and laconic as the most grizzled New Englander, but still excellently, quietly creepy. The problem is that the ending was a little too close to the beginning, and it might have worked better as at least a half-hour short instead of twenty minutes.

The good news is that the film is well-acted and has a solid sense of atmosphere. It also doesn’t attempt to show much of the horrors that the characters see, instead letting the unlimited budget of the viewer’s imagination take over, which is always better. Mostly I’m wishing there could be a director’s cut version that might expand a little more on the build of tension, not to mention Elise’s issues and their effect on her marriage. But it was still an enjoyable watch, giving an entertaining glimpse of a little-known King short story that’s almost biblical.