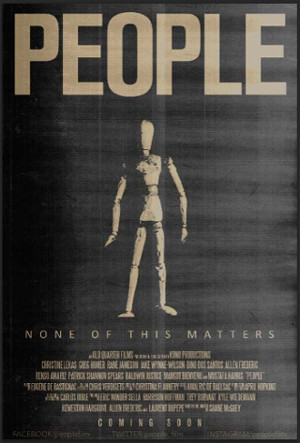 For instance, Rainey (Christine Lekas) is seeing a psychiatrist (Greg Homer), trying to get past a childhood where her brother was abused for being gay and she was abused just because. I have a feeling this isn’t the first psychiatrist she’s gone through by a long shot. Rebellious and sardonic, she takes to therapy like a duck to the desert, doing her best to turn the tables and make the psychiatrist answer a few personal questions for a change.

Then there’s Richard (Jake Wynne-Wilson), who’s meeting Jeffrey (Rane Jameson) for dinner after a recent one-night stand. It’s awkward, to put it mildly, and I think a lot of good Chinese food probably goes to waste. Meanwhile, at Steve’s (Allen Frederic) house, a few friends gather to watch the fights and debate the ins and outs of US military policy in the Middle East. No, seriously. Except Renso (Renso Amariz) served in the Marines in the Middle East, and he doesn’t like anything Brandon (Patrick Shannon Spears) has to say about it — or anything else, for that matter.

Taylor (Margot Bienvenu) was supposed to be at a wild party, but her night has been wrecked by her boyfriend Baldwin (Baldwin Justice), who has managed to cut his foot rather badly and needs her to drive him to the ER. And back at the wild party, Franz (Mustafa Harris), a scriptwriter, isn’t having any fun either because he’s on a conference call with a couple of glorified accountants who love his new script, really. It just needs some character development, plot, and a good initiating event that they can all get behind instead of all this silly dialogue.

I’ll give it four and a half out of five. It’s fascinating to watch these separate scenes slowly weave together, or in some cases just collide, and it all happens in absolutely realistic fashion. In retrospect, some of the dialogue seems like it should be unwieldy, yet it never feels that way while you’re watching as the actors all skilfully manage to sound natural. By the final scenes everything has gotten more than a little manic but that’s as it should be, and the ending is both inevitable and a wonderful surprise.

Even better, it’s also a movie that rewards your attention, which I always like. There’s a prop that appears in more than one storyline, for instance, and if you know your French existential philosophers there are also other Easter eggs to find. But the beauty of it is that you don’t need to know anything about philosophy. Just being a person is enough to enjoy the film.