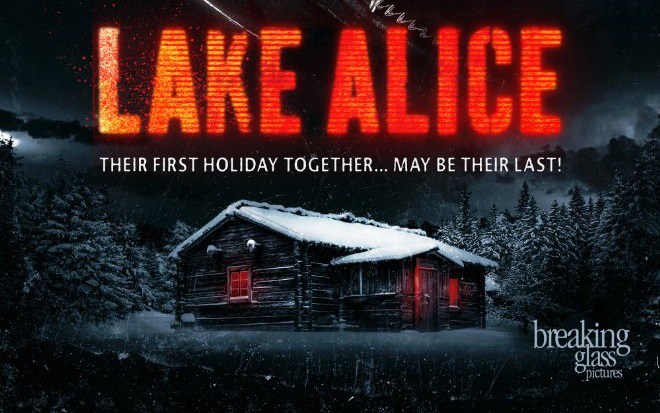 It’s that time of year again, and the Thomas family is headed to their cabin on Lake Alice for the holidays, because isolated cabins are always a good place to stay. And Lake Alice is a real lake in Wisconsin, not far from Tomahawk, where this was filmed.

It’s that time of year again, and the Thomas family is headed to their cabin on Lake Alice for the holidays, because isolated cabins are always a good place to stay. And Lake Alice is a real lake in Wisconsin, not far from Tomahawk, where this was filmed. Anyway, daughter Sarah (Caroline Tudor) has been off at at college in California, which is where she met boyfriend Ryan (Brad Schmidt). Sarah’s dad Greg (Peter O’Brien), following long tradition, isn’t so sure about Ryan — he makes movies, for heaven’s sake! — but mom Natalie (Laura Niemi) is more willing to give him a chance.

It seems like a pleasant family trip, but you know that can’t last. Some of the locals are a little off, for one thing, and since that includes the deeply suspicious sheriff (Michael Shamus Wiles) and his deputy (Craig Rees), who loves using his authority, it makes things slightly awkward. There’s also Carl (Patrick Burch), who seems nice enough but is extremely bad at picking up social cues. I mean so am I, but not quite that bad. There’s also Sarah’s old friend — and former summer fling — Tyler (Brando Eaton) and his mother (Eileen Dietz). They’re both taken aback at the existence of Sarah’s boyfriend, but soon seem to take it in stride.

It soon becomes clear that someone’s stalking the family, and shortly thereafter everything else becomes completely unclear. Everyone is screaming, panicking, and running aimlessly in the dark, and I couldn’t tell who was where or what was going on. Eventually the editing gets back on track, but for a while the movie was doing a much better job of building confusion than tension. There are the usual doubtful decisions from the characters — almost no one thinks to grab an improvised weapon, for instance — though I’m happy to say these were kept to a minimum. Not one person ran out into the snow barefoot, which is something no true Wisconsinite would do, stalker or not. We know better than to risk frostbite.

But while it’s definitely uneven in places, the cast holds everything together admirably. Several characters meet especially gruesome ends, but the movie wisely lets the viewers’ imaginations do the work rather than showing the carnage on screen. The final reveal is excellent, the ending tantalizing, and while the female characters do more than their share of screaming, they also don’t just sit around and wait for help. After all, even the most hardened killers mess with the bonds of family at their peril.