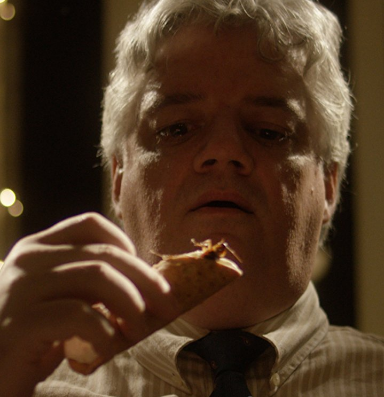 Exses is a powerful demon, or maybe a vampire. Even Andy isn’t sure about the details. The point is, Exses needs humans to survive and Andy needs everyone to love his restaurant, so a deal is struck: Andy will feed various “bad people” to Exses, and in exchange Exses will handle Scoppa’s public relations. This, apparently, involves mind-controlling the entire city into believing they won’t find better lasagna anywhere else.

It’s the perfect arrangement, right? At least that’s how Andy explains things to Jeremy (Anthony Misiano), the hapless busboy who’s just had the bad luck to witness Exses’ latest meal. Granted, the victim in this case seemed like a terrible bore and a little inconsiderate of the wait staff, but those hardly seem like capital crimes and Jeremy is now in a terrible predicament. On the one hand, turning Andy in might get Jeremy killed, or at least labelled a lunatic. On the other, mass murder.

Andy swears the wait staff is perfectly safe because that’s part of the deal and seems surprised that Jeremy doesn’t fall into line, so he does his best to be Jeremy’s new best friend. Meanwhile, actual best friend Corey (Tommy Kang) has a hard time believing the wild story Jeremy tells him, though admittedly Corey seems to have a difficult time focusing on anything that isn’t partying or chasing girls. But Karen (Stephanie Juergens), the new girl who Jeremy has a crush on, doesn’t believe it either, and who can blame her?

Now throw in a city health inspector (Paul Caron), a famous food critic (Matthew Fitzgerald) and his photographer (Sam Haft), three food bloggers (Mina Mirkhah, Austin Francisconi, and Debra Jans), ex-military tough guy Michael (Matthew Thomas Burda) and the rest of the staff at Scoppa and you’ve got a pretty wild ride. The hapless Jeremy is a reluctant hero at best, stumbling from one problem to another until Michael shows up as a deus ex machina to keep things moving. I can’t blame Jeremy for being confused, since the plot was about as straightforward as a pile of overcooked spaghetti. There was something about a parallel world and a very important jawbone, but that’s about all I can tell you.

The movie was far from a total loss, though, because as awkward as the storyline got, the humor was good and the characters were wonderful. From the supremely sarcastic server Cassie (Rachel Schenk) to bored bartender Max (Tony White) to the psychotic Richard (Byron Clohessy) they were all absolutely real and the camaraderie among the restaurant staff in particular was perfect. The little background touches are excellent and often as funny as any of the jokes, which, thankfully, flow naturally instead of being forced into the script every two minutes. In the end, it’s the story of a strange little man and his misguided dreams as much as anything else, and sometimes those dreams require a sacrifice like you never imagined.