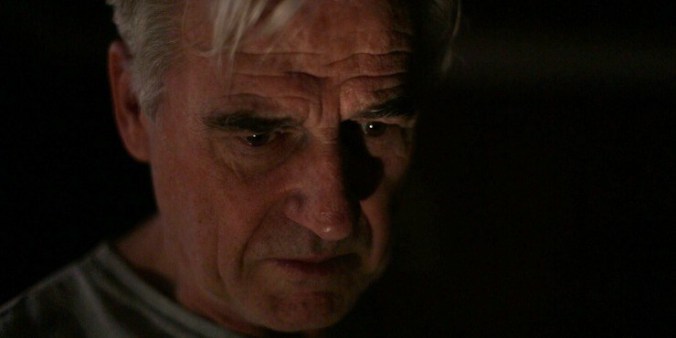 Now, Harry Collins (Tim Ahern) is the last survivor of the three following Peter’s death in a freak accident. Harry suspects it wasn’t an accident, though I can’t say whether I agree with him or not since the movie doesn’t share any details. It may or may not have involved something that looks like an old homemade baseball bat, however. The other denizens of the lodge, for the most part, seem a lot less concerned about the manner of Peter’s death and a lot more interested in how he left his property.

Much to the chagrin of nephew Eddy (Matt Oliver) and his wife Sue (Nicola Wright), the lodge and all the land have been willed to Jackie (Janis Ahern), the caretaker who’s doing her best to keep the old place from crumbling down and who, like Harry, genuinely mourns Peter’s death. But Eddy has debts to pay, you see, the kind that don’t get turned over to collection agencies, and he’s desperate for the cash he thought he’d get from selling the property. Overturning the will might take years, and enforcer Maclaren (Paul Wilkinson) won’t wait nearly that long.

Eddy has a plan, though, and with some help from the intimidating groundskeeper, Graham (Paul Maddison), and the naivete of the housekeeper, Penny (Kim Driver), he just might succeed. But he hasn’t counted on Harry’s sudden arrival and that changes things, in more ways than one. Returning to his old haunt has brought back a lot of memories for Harry, and some are much more disturbing — and disturbingly real — than others. Bobby (Nicholas Koy Santillo), dead years ago in Vietnam, has returned to haunt his old friend, but whether for good or ill is another question.

The movie lies somewhere between a horror film and a standard thriller, but the combination works out well — Harry’s nightmares, sleeping and waking, help create an eerie atmosphere that gives the thriller portions an extra edge. And Harry is a refreshingly down-to-earth character, practical even in the face of events that can seemingly only be supernatural, and Ahern carries the film expertly with very capable help from the rest of the cast. It’s an excellent plot with believable dialogue, and let me also add how glad I am that the filmmakers didn’t resort to a more recent war so as to fill the cast with 20-somethings. Harry’s philosophical nostalgia adds a great deal to the film.

I can’t go any higher than four out of five, however, as the musical score and sound effects were apparently out of control. Loud musical stings come out of nowhere and there’s rarely anything happening on screen to warrant them. Shots of empty hallways are bizarrely accompanied by dramatic flourishes, and there’s too much use of sounds and dialogue being played backwards. Yes, it’s creepy and often gives a shiver, but it’s mainly an audible jump-scare, and not something that I would have expected to see so often in an otherwise genuinely suspenseful and eerie film.

It’s otherwise a solid film, though, well worth a watch and an excellent example of what can be done with a small budget and an equally small cast in a contained, almost claustrophobic setting. As isolated as the lodge is, you still can’t get away from your past there.