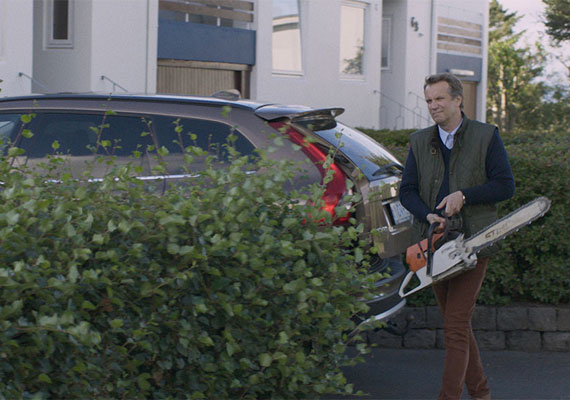 There’s an old saying about how you can choose your friends but you can’t choose your family. You also can’t generally choose your neighbors, and sometimes they can be even harder to avoid than family, It can be a real risk to try to befriend a neighbor, because if it all goes wrong somehow your only option is to pack up and move, and that’s a hassle nobody wants. Still, in Under the Tree, both sets of neighbors would have been much better off if they’d fled to opposite sides of the country.

Admittedly Iceland isn’t a very big country, but that might have worked. It sounds like the neighbors got along until Konrad (Þorsteinn Bachmann) got a divorce and moved his girlfriend Eybjorg (Selma Björnsdóttir) into the house. Meanwhile, Baldvin (Sigurður Sigurjónsson) and Inga’s (Edda Björgvinsdóttir) elder son Uggi has disappeared, and while it’s believed that he took his own life, Inga is still tormented by the uncertainty. Younger son Atli (Steinþór Hróar Steinþórsson) is having marital difficulties, as his wife Agnes (Lára Jóhanna Jónsdóttir) was upset to find him enjoying a video a little too much. Yes, it was one of those, though I won’t mention the particularly odd twist. So Atli has moved back in with his parents and into Ground Zero.

Inga and Baldvin have a largish shade tree in their backyard, you see, and they’re proud of it since there aren’t many other sizable trees in the area. But Eybjorg likes to sunbathe — which seems like a doubtful hobby in Iceland — and the tree’s shadow falls right across her back porch. Bitter over the loss of her son and jealous of the younger woman, Inga throws a fit whenever anyone suggests so much as trimming the tree. The situation is at an uneasy impasse until the dirty tricks start, and escalate fast. When Inga’s cat goes missing, she confronts Konrad, who coolly denies all knowledge… while taking a chainsaw out of his car.

You can imagine how things go from that point. Scandinavian movies can be pretty dark, but this one is darker than any Icelandic winter and twice as cold. Though you often sympathize with the characters — Inga is certainly spiteful, for instance, but the limbo she’s forced to live in must be terrible — it’s hard to really like any of them. Eybjorg and Konrad seem to expect that everything will go their way and can’t seem to get it when life inevitably doesn’t cooperate. Baldvin prefers to hide at choir practice rather than face reality, and I won’t even get into Atli and his temper.

But as another old saying goes, even the wicked get worse than they deserve, and that’s certainly true here. By the time the dust settles and the blood dries, no one left standing will ever be the same, though it’s doubtful if any of them have learned much. The slow, steady escalation of the situation is perfectly paced, however, and even when you want to shout at the characters to stop being so ridiculous, you also can’t wait to see what bizarre thing happens next. It’s the ultimate slow-motion train wreck with some of the darkest and most uncomfortable humor imaginable. But it’s also a solid drama and a fascinating watch that you won’t be able to look away from — even if you really, really wish you could,